After finishing my butter cow page a couple weeks ago, I was in the mood to continue my Illinois State Fair scrapping and completed two layouts last night. I had spent an evening at the fairgrounds with my friend, Michele, and while wandering around inside the lower level of the Grandstand before the Boyz II Men concert were were attending, we discovered a display area with old characters that were lively and well-known features of the Dairy Building when we were kids: a talking cow and animated milk carton. Both were deactivated in the display, but we could touch them and pose with them for photos, which we did. 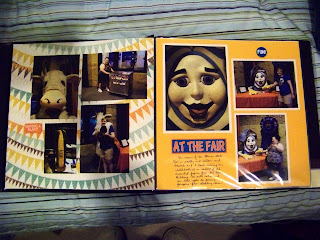 I used my other layout to focus on my favorite fair foods: Vose's corn dogs, elephant ears and soft-serve ice cream from the Dairy Building (or a milkshake, as it's called if you buy it from one of the two stands designed to look like giant milk cartons). I was able to have Michele take photos of me with all but an elephant ear (too much food for one night!). 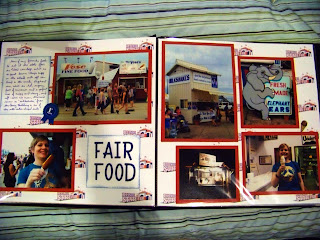 I love the paper I found for the food page -- if you look closely, you may be able to see the Illinois State Fair logo printed on the background. I found it at Paper Boutique, and I was so excited because it's hard to find scrapping materials that are themed that specifically. It was a bit pricy -- I believe it was close to $2 per sheet -- but I couldn't resist the splurge.

I'm looking forward to a day of scrapping this weekend at Paper Boutique. It's been a while since I've had the chance to spend an entire day cropping, and I plan to focus and make some progress. What will I work on? Stay tuned ... :-)
Posted by Mandy's Musings at 9:25 PM

Mandy's Musings
I'm a creative word person at heart, a newspaper designer and copy editor by trade and a scrapbooker and writer in my off time (and occasionally at work, when I get lucky!) I have a wonderful husband, Camille, an amazing church family and an outstanding fitness community at CrossFit Instinct in Springfield. I'm incredibly blessed.